Here's what  our customers thought.

House renovation and large extension.
I initially hired Justin to insert lintels above eight windows in my house as well as rebuild a garden wall and a few other small jobs.  I was so impressed both with the quality of his work and his cheerful can-do attitude that I went on to hire him to build a full two storey extension to the house after he suggested a really cost effective way of constructing it.  We agreed a tight four week deadline to build the superstructure and he got it done in time and again to a very high standard.

The quality of the brickwork in particular was outstanding. He also introduced me to other excellent tradesmen who worked on the house.  He also did a brilliant job of landscaping the garden including building retaining walls for raised beds, and a large patio of Indian stone.  He was also a great source of creative ideas for the garden and saved me thousands by advising on the construction of my driveway and recommending a great steel fabricator for my gates.  I would very happily recommend him for any building work.

Justin and his team worked on my property early this year as my house had fell into disrepair.They quoted me quickly and helped me with solutions to problems i had no idea could be rectified ,The first thing i noticed once worked commenced was just how tidy they kept there work areas,The team was always punctual and very well mannered making the boys a pleasure to be around.The quality of workmanship was of a high standard bringing my house back to life.I found JT brickwork well priced as i had several other quotes prior to settling on Justin.
I am 100% satisfied with the teams hard work and would have no hesitation recommending him and would be happy to speak to anyone thinking of hiring them. 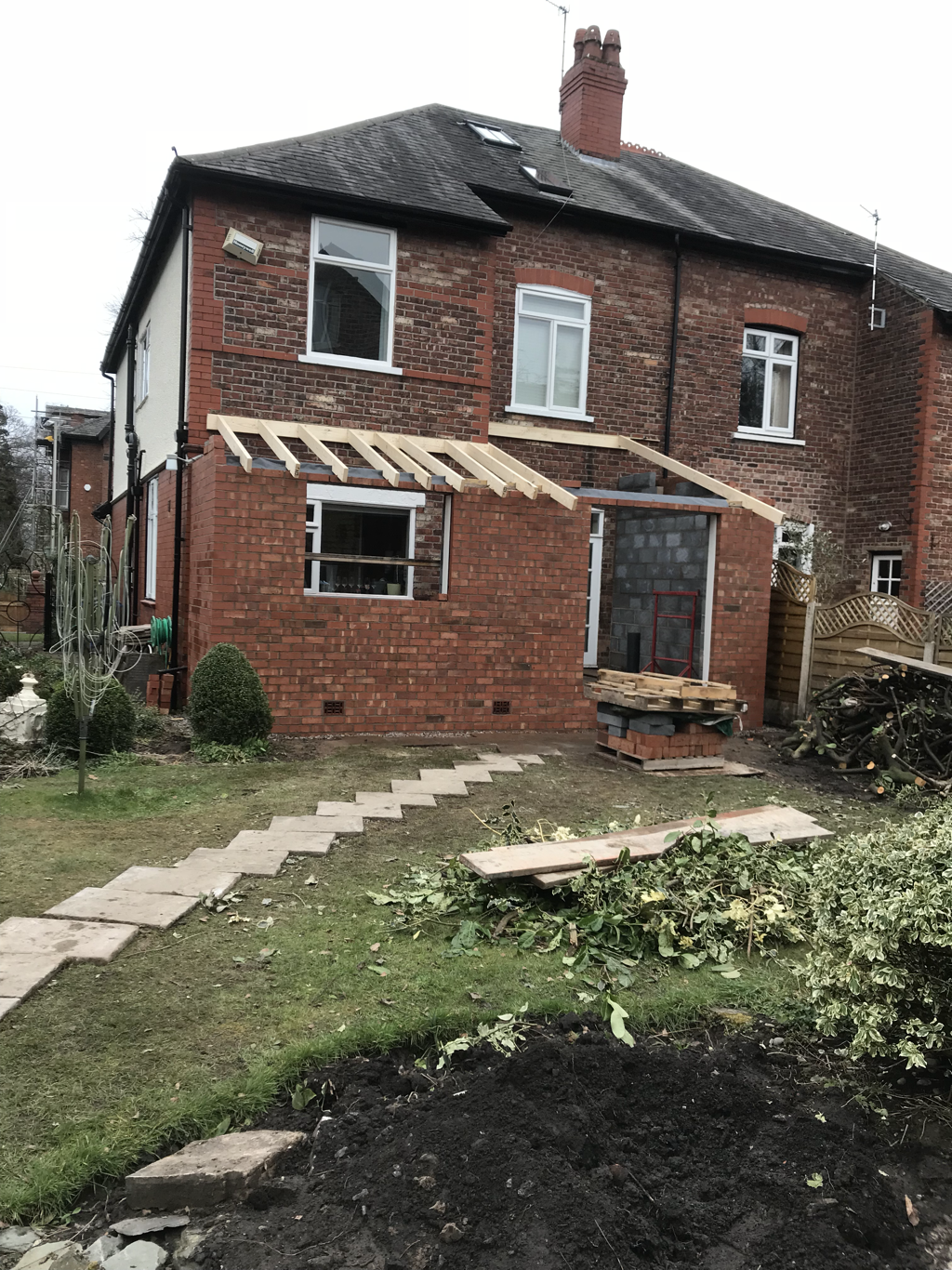 The latest project is well underway in Heaton moor, (March 18)


We contacted several building companies to provide quotations to demolish our existing rear extension, and rebuild it to our new design, together with a complete rewire of the house. Jay Taylor Brickwork provided a very competitive price, and were keen to show us an example of their work they had recently completed close to our home. We had an opportunity to ask questions of the homeowner regarding the quality of the work and their working relationship. We were impressed with the responses, including the fact that they were a repeat customer, and this convinced us to go with Jay. We also then decided to include the new sliding doors and velux windows in the extension, new windows in the existing house and new fascias and guttering to the whole house in the final scope with Jay.


Our experience has been positive throughout the building work. Jay has taken a very proactive approach to the work, making several recommendations to us as the project progressed. One suggestion changed the design we had initially prepared that has resulted in a superior layout to the one suggested by our architect.


Jay has been very open about costs and stage payments throughout the project. The only extras we incurred were as a result of changes and extras that we requested – there were no surprises in this respect and this helped the job to progress smoothly and without any clashes.


Although the project included the fitting of a new kitchen, which was installed by the kitchen provider, Jay did offer to fit the kitchen as an optional extra.


We employed a separate company to install a new central heating system complete with all new radiators, as Jay does not offer a ‘Gas Safe’ engineer. This was made clear to us at the time of quotation, and it gave us no problems during the building work. Both companies worked side by side with no issues.


We would have no hesitation in asking Jay to do further building work for us, and can wholeheartedly recommend him to others for such work. His friendly and approachable nature, together with his enthusiasm to do the job right, has made it a pleasure to business with him and his workers.